There are several tattoo methods used to achieve various looks for your ideal set of brows. There isn’t one brow shape that fits everyone, just as there isn’t one technique that’s best suited for every individual.  Sometimes the technique that’s right for you comes down to personal preference, while other times various factors such as skin type, makes a person better suited for one technique over another. Here are the four eyebrow techniques that I currently offer my clients. 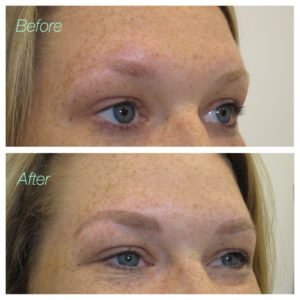 Microblading, also known as micro-strokes, eyebrow feathering, and eyebrow embroidery is a manual method of tattooing. That is to say that the hand piece used to create hairstrokes is not connected to a power source. Hairstrokes are manually feathered into the skin using just the pressure from the artists’ hand and the microblade. Microblading uses similar needle formations to machine work and the same pigment as any other brow technique I offer. Because it’s a manual method and pigment isn’t being packed into the skin multiple times throughout a single stroke (as it is with a machine) it doesn’t have the longevity that machine work does. A lot of artists advertise microblading as “semi-permanent” which I feel is misleading.  Yes, it will fade faster than any of the other eyebrow techniques, but there is no guarantee that your brow area will ever look like virgin skin again.  Even if you never have your brows touched up, there will always be a microscopic amount of pigment underneath your skin even if it’s barely visible.

This technique is best suited for those with fine textured brow hair, someone who wants an ultra natural look, or anyone hesitant to fully commit to the permanence factor of machine work.  Microblading on average requires touchups every 18 months but could last as long as 3 years before noticeable fading. 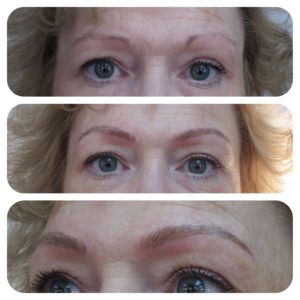 Permanent hairstrokes, like microblading refers to the replication of hair growth but is implemented with a machine as opposed to a hand piece. This technique is comprised of line work that simulates a full and natural brow. The name ‘permanent hairstrokes’ can be a little misleading.  This is not a ‘one and done’ technique as it will require touchups every couple of years.  All tattoos fade over time, especially on the face with is constantly exposed to all of the elements, (mainly the sun) as well as a skin care regimen that can often times be too aggressive for PMU.

Permanent hairstrokes are best suited for those with little to no hair as this technique appears more three dimensional that the powderfill technique, which we’ll talk about next. It’s also recommended for those who have slightly more corse hair growth or for those who would like to push out their maintenance visits more towards the 3-5 year mark. 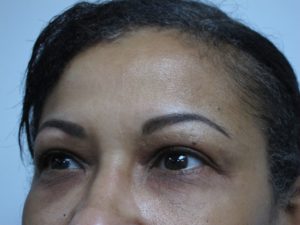 The powderfill technique is a shading technique, which is also done with the machine for those who are looking to replicate a makeup look.  A powderfill brow simulates a penciled or powdered brow, similar to what most of my client’s do to their brows daily prior to getting PMU.  Unlike hairstrokes which have skin peaking through between them, a powderfill brow is an all over background color behind the brow.  This technique lasts the longest before needing touchups and will eventually fade into a more pastel version of itself.  This kind of fading allows the artist to tweak or alter the color as the client ages. Depending on your lifestyle this look may last as long as 4-5 years before needing a color refresh. 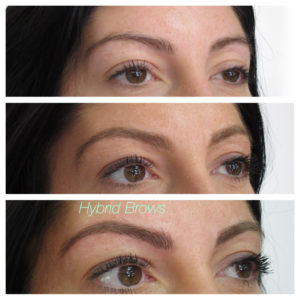 Hybrid or combination brows are a blend of the powderfill and hairstroke techniques together. Typically the powderfill is done at the first appointment and the hairstokes are added over top at the touchup visit. Another option for the blend of this technique is to feather hairstrokes at the front of the brow and ombre it into a powderfill horizonntally. This is great for a client who wants definition and texture and isn’t afraid of a bolder look.

After assessing your brows at the consultation I will be able to determine which technique is best suited to you. In some cases a client is a candidate for all of the techniques so it comes down to personal preference.

About the Author: admin